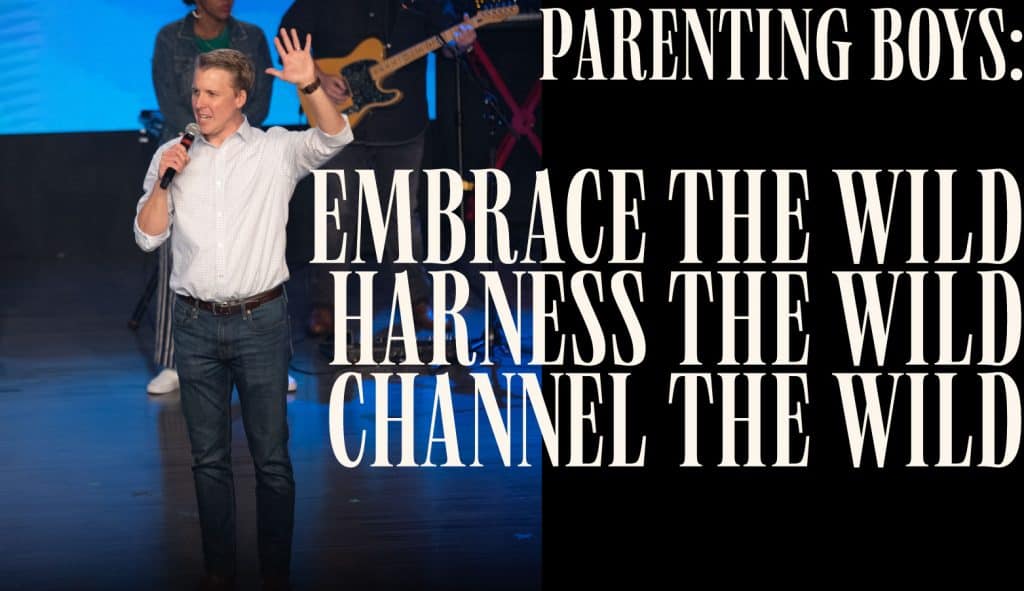 Do you ever pause and consider how unique automobiles are?

How incredible is it that we can climb inside this enclosed frame of metal and glass, turn a key, step on a pedal, and travel in an hour what people 200 years ago could only travel in a day?

Or take the light bulb.

Back in the day, people had to light a candle if they wanted to see at night, and even then it would only light up a small area.

Now? Just flip a switch, and the whole house lights up.

What’s the secret to these modern marvels that could instruct us on parenting boys?

Behind the scenes of all these things, especially boys, we find one thing–energy.

Or, actually, it’s the harnessing and channeling of that energy.

The automobile moves forward because of a controlled explosion between a spark and gasoline. The light bulb turns on because it harnesses electricity channeled toward an enclosed filament. We take something so destructive in and of itself and learn to harness it for good.

What if we applied that to the beautiful ball of energy we call a boy.

Nothing sets off a series of antidotes about destruction and chaos quite like bringing up the subject of raising boys. War stories are told into the night about the weeping and gnashing of teeth accompanied by raising the most virulent of our species.

But what if there’s a better way?

What if there’s a way actually to embrace that energy, harness, and channel that energy, so just like the car and light bulb, our boys can positively impact the world.

This sounds like 3 tips worth exploring. So we’ll start with the first:

I imagine whoever first discovered fire made a wrong decision in the first few moments.

First, they thought it was beautiful. Second, of course, they wanted to touch it.

But what if our cavemen ancestors decided to never have anything to do with fire again?

What if they vowed to suppress it, no matter what?

Well, I wouldn’t be able to drive to Target to buy a lighter to light the wood in my fire pit so I can make s’mores. Tragedy. We tend to do the same with little boys. We see the wildness in them– whether it’s them running through the house wielding a lightsaber and wearing a cape or climbing to the top of the bookshelf to do a flip onto their unsuspecting sister– and in our tiredness and frustration, we try to match their energy with our anger in an effort to shut it down.

No judgment here. I have 3 of them. Been there.

But what if we saw this energy and wildness as a gift instead of a curse. What if we started thanking God for their passion for adventure, drive to push the limits and commitment to explore the unknown? After all, where would we be without brave, curious men who boarded ships in hopes of discovering new land? Scientists who were driven to beat disease? Soldiers who fought fiercely to conquer evil? Were they not at one time little boys who stayed out too late in the woods and came back with torn clothes? Teenagers who perhaps set the backyard

on fire? Got in trouble because they punched a bully for mistreating a smaller kid? History has been shaped by these kinds of wild boys. Why? Because change requires energy.

Isaac Newton’s First Law of Motion states, “An object will not change its motion unless a force acts on it.”

Boys are a force, and if you’re fortunate to be the parent of one or several (bless you) of them, then consider yourself blessed to be raising up a potential history-maker. Because the fact is, there are many evil things in motion in the world, and we need parents who are going to raise up little forces to redirect that motion.

Here is the point where I emphatically say: embracing the energy doesn’t mean you let them destroy the place! Houses burn down because the special coating on wires starts to fray, and the electricity can spread uncontrollably. Cars explode when a spark comes in contact with a gas leak. And I recently watched a documentary on a leaking nuclear reactor… bad news. Energy needs boundaries. Boys need harnessing. To completely smother a young boy will put out their fire in an unhealthy way, leaving them tame, passive, insecure, and afraid. But clear boundaries and healthy discipline will cultivate that energy and keep it safe at the same time.

Do your boys know what the boundaries are? Have you been clear about the expectations you have for them? Are you consistent with enforcing those boundaries? Do you overlook their missteps to avoid having to deal with them? Once you’ve harnessed this energy and set appropriate boundaries, you can begin channeling their energies in productive ways.

Energy needs somewhere to go. It needs to flow through a conductor. It needs something to burn. Boys need activities and projects to provide an outlet for their energy. This is why sports are great for kids. It has boundaries and rules built into it (including interpersonal boundaries like sportsmanship and teamwork). It also has an ultimate goal for their energy to achieve. If energy isn’t channeled intentionally toward a positive outcome, it will spill out unintentionally toward a negative result.

Boys need challenges. They need woods to explore. STEM kits (see Amazon) to put together. LEGO sets to build. Races to run. Milestones to achieve. Yes, this takes work. This takes intentionality from the parent. Creativity. But it is way better than the alternative! Jails are filled with adults who were bored kids. They didn’t have anybody to challenge them or cultivate the God-given energy inside of them.

So that’s my attempt to reverse the bad PR that wild boys get.

Instead of talking about how wild your son is, why not talk about his great potential to affect change? What not start speaking that over him and TO him! What if that kid started believing he could make a positive impact with his energy?

Instead of focusing on the problem, see the potential. After all, driving to the store is way better than walking!

Light bulbs are way better than candles! Now, look down and see the world-changer in front of you.