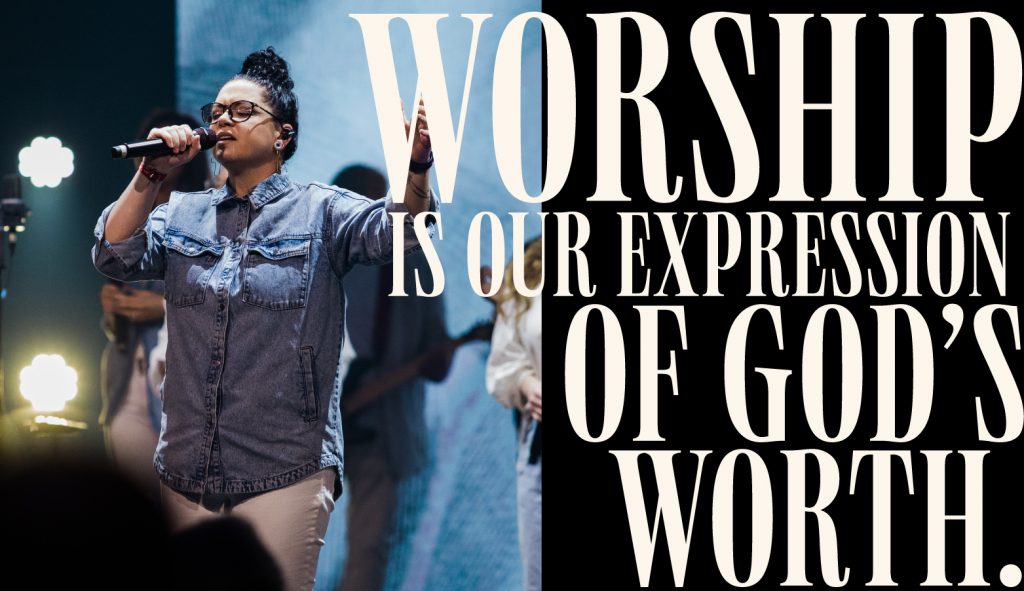 What I wish everyone knew about worship.

It’s so easy to come into a church service and see people singing their hearts out on stage and sit there and think, ‘Man if I could only sing like them! I could have some incredible worship!’ Or ‘If I could only play like that person! THEN I could really worship!’ And there’s no doubt that the Lord uses music to help us worship Him. But worship is not simply a song, singing, or music. Worship is our expression of God’s worth. It’s an action, a prayer, and sometimes a melody straight from your heart to the Father’s heart.

One of my favorite Bible worship stories is the story of the woman who anointed Jesus’ feet. In Luke 7:36-50, we read a story about a woman coming and anointing Jesus’ feet while He is at a dinner table with His disciples. This woman who did not have a good reputation comes straight in and starts weeping at His feet, wipes His feet with her hair, and anoints His feet with expensive perfume. The man whose house they were having dinner at could not believe Jesus would even let this woman touch Him. ‘If He was really a prophet, He would know what she’s done.’ The man thought. Jesus immediately addressed the man,

“And Jesus responded and said to him, “Simon, I have something to say to you.” And he replied, “Say it, Teacher.” “A moneylender had two debtors: the one owed five hundred denarii, and the other, fifty. When they were unable to repay, he canceled the debts of both. So which of them will love him more?” Simon answered and said, “I assume the one for whom he canceled the greater debt.” And He said to him, “You have judged correctly.” And turning toward the woman, He said to Simon, “Do you see this woman? I entered your house; you gave Me no water for My feet, but she has wet My feet with her tears and wiped them with her hair. You gave Me no kiss, but she has not stopped kissing My feet since the time I came in. You did not anoint My head with oil, but she anointed My feet with perfume. For this reason, I say to you, her sins, which are many, have been forgiven, for she loved much, but the one who is forgiven little loves little.” And He said to her, “Your sins have been forgiven.” And then those reclining at the table with Him began saying to themselves, “Who is this Man who even forgives sins?” And He said to the woman, “Your faith has saved you; go in peace.””

In this story, there wasn’t a single song sung. There wasn’t a single instrument played, but there was an outpouring of worship to Jesus. Ultimately the Lord isn’t just simply looking for worship in action. If He was, the religious leaders of Jesus’ day would have been His favorite people. In Isaiah, it says,

“These people come near me with their mouths and honor me with their lips, but their hearts are far from me. Their worship of me is based on merely human rules they have been taught.”

He’s looking for and desires the heart of the worshiper. He’s not a God that needs and craves attention from a man. He craves connection and family. He’s our Father. He’s looking for people whose hearts belong to Him. People who don’t care who sees or judges them, have seen the goodness of Jesus and want to offer Him something that reflects His worth. And when your heart is His, everything you do can be worship to Him.

How you respond to your family and coworkers can be worship to Him. When your heart belongs to the Lord, the most simple and mundane things can become a sweet-smelling fragrance to Him. By simply honoring the Lord in our day-to-day lives with our actions, decisions, and lifestyle, we worship the Lord and bring honor to Him.

Don’t let your worship be a religious ritual of going through the motions. Instead, pour out your heart to Him in everything you do, which is true worship to the Father.